This lesson is packed full of information.  Even still, we’ll hardly scratch the surface on what there is to know about the brain.  It’s complicated!  Since this lesson is a bit longer, feel free to take a break in the middle.

In this lesson we will look at the outside of the brain, and also a longitudinal slice showing the inside.

Download the crossword puzzle here.  The answer key is included.

You can print out this page or just look at it on the screen.  Either way, try to figure out which brain belongs to which animal.  Then you can take a look at the answer key.

When you are ready for the answer key, you can view or download it here.

Some people think that Michelangelo used the image of a brain to design at least one of his masterpieces on the Sistine chapel.  In the scene called “The Creation of Adam” (on the left, below) God and his angels are inside a shape that bears some resemblance to a sagittal section of a brain.  On the right is a close up of the neck of God from the scene where he separates light from dark on day one of creation.  It seems to resemble the brain as seen from the bottom.

Some people are convinced that Michelangelo was looking for a way to brag about his knowledge of anatomy without getting into legal trouble.  Back in that day, dissection was illegal so letting people know you’d seen a brain wasn’t exactly a smart move.  Some people say the whole theory is rubbish and it’s simply a coincidence of similar shapes.   There’s no way we’ll ever find out the answer to this puzzle, but people still like to argue back and forth!  What do you think? 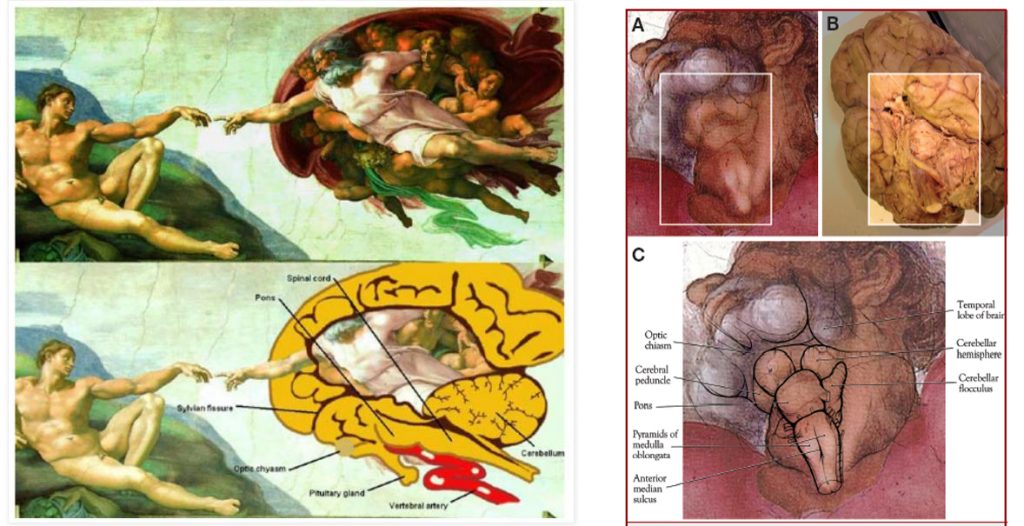 Activity 64-4:  What is Parkinson’s Disease?

We learned that the midbrain produces a neurotransmitter called dopamine.  The neurons that produce this chemical are located in two darkly striped areas of the midbrain called the “substantia nigra.”  (These cells produce the pigment melanin, as well as dopamine.)  If these cells stop their production of dopamine, the muscles will not receive the appropriate signals from the brain and will not be able to start or stop motion.

Here are a few short videos about Parkinson’s Disease.  The first is by the Michael J. Fox Foundation.  Michael was the star of the hit movie series “Back to the Future.”  He came down with Parkinson’s at a very early age, and has generously donated his money and time to Parkinson’s research.