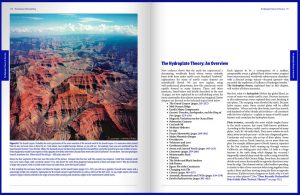 In this lesson, we will cover the first half of the chapter titled “The Hydroplate Theory; An Overview.”

PAGE YOU WILL NEED FOR THIS VIDEO:

PAGE YOU WILL NEED FOR THIS VIDEO:  Template page initial conditions

Note: In video 1B I use the edible models listed below in the activity section.  If you would like to have your own models in front of you when I show mine on film, prepare the snacks before watching the video.

PAGE YOU WILL NEED FOR THIS VIDEO:  Evaluating Theories template page

Watch a geologist admit that he can’t explain how the crust of the earth can have granite and basalt so close together.  (Bear in mind that he is assuming the initial conditions of chemical/geological evolution where the earth was hot and cooled very slowly.)  Listen to him explain how he thinks the rocks formed, then think about the fact that we find granite continents sitting on top of a thick layer of basalt.  The granite is closer to the surface than the basalt it.  Which cools faster– the outside of something or the inside?  Do his observations of the world confirm the predictions of his initial conditions?

Suggested activities for this lesson:

Activity 1.1:  An edible model of the inner earth

You will need:  an apple, a piece of carrot, peanut butter (or a creamy substitute if you can’t eat pb) and a small knife.

This video shows you what to do.  https://youtu.be/aGQtBtldzxg

Make this dessert in the blender, pour it into a dish, pop it in the oven, and then let heat and gravity do their work.  Observe how gravity causes things to settle out in layers.  You can eat this snack while you ponder whether the Tale of Early Earth told in textbooks does a good job of explaining what we actually see in the crust of the earth.

You will need:  4 eggs, 2 cups of milk (non dairy milk is fine), sweetener of your choice (suggestion: 1/2 cup sugar), 1 tsp flavoring (vanilla recommended but you can use almond or fruit flavor), 1/2 cup flour of your choice (gluten-free is fine), and a selection of things to toss in (such as coconut flakes (highly recommended, as they will provide a toasty top layer), nuts, mini-chips, raisins, blueberries, etc.)

Put eggs, milk, sugar, flavoring and flour into blender and mix.  Pour into glass baking dish.  (Glass allows you to see the layers.) Add other ingredients and mix by hand.  Bake at 350 F until the dessert “sets” and a knife comes out clean (30-40 min).

Print out this worksheet and think about each statement, classifying it as fact or inference.  Answer key is at the bottom (upside down and printed very small– fold it under while working).  Fact or Inference worksheet

Many civilizations have flood stories– it is a common theme in ancient literature.

Here is the Chinese version:

Here is a Babylonian (Akkadian) version that was written on clay tablets:

If you are interested in learning a lot more about other ancient flood legends, and wonder about their relationship to the version recorded by the Hebrews, and whether they can be used as evidence for the reality of a global flood, here is the best book to buy:  https://www.amazon.com/Flood-Legends-Charles-Martin/dp/0890515530/ref=sr_1_2?dchild=1&keywords=flood+legends+master+books&qid=1608850983&sr=8-2

FOLLOW-UP ACTIVITIES for students using this course for credit:

Summary of Q & A Session we had for this lesson:

QUESTION:  How many comets would there have to have been to provide the water for all the oceans?    ANSWER:  Millions!   And at the same rate we see them today, which is infrequent.  Yes, this is why they need billions of years.  But the idea still does not work because on the primordial earth there was not sufficient atmosphere to hold the water vapor.  Also ignored is the heat of impact– when a comet or asteroid crashed into the earth it would generate and IMMENSE amount of heat, enough to vaporize and basically destroy the water molecules or at least send them off into space.

QUESTION:  Do we know exactly how (in the HPT initial conditions) the water could have risen to the surface twice a day?  ANSWER:  No, we can only guess.  We will look at the crust in more detail in the next lesson and you might be able to generate some theories.

QUESTION:  Is the “firmament” mentioned in Day 2 of creation week actually the granite crust?  ANSWER:  Possibly, but possibly not.  Dr. Brown believes that the “raquia” or “firmament” of Day 2 is the crust and you can read his argument in the FAQ section (part 3) of his book.  Personally, I have a problem with this because of the word “sky” or “heaven” being used to described the space between the waters.  I don’t think we can ever be sure of what this verse is referring to.  Many HPTers believe that “heaven” could refer to the surface of the globe since (before sin) heaven and earth were one.  However, I’d like to point out that the Garden of Eden was the touch point between heaven and earth, not the whole earth.  God was able to banish Adam and Eve from the garden and remove them from His presence.  Most of the globe was, then, not heaven on earth.  We can deduce from other writings, including some non-Biblical ancient texts, that most ancients believed that Eden was a mountain, with the rivers flowing down from it.  // In the end, it doesn’t really matter what Day 2 was referring to.  It does not prove or disprove the HPT initial conditions.

QUESTION:  What is the mantle made of?   ANSWER:  We don’t really know since we have never drilled down into it.  However, it is most likely made of olivine and other silicon-based minerals.  Sometimes a chunk of unmelted rock comes up with lava, often olivine, and the assumption is made that this is a piece of mantle rock.  Though we can’t prove this.  Most of the time the mantle is melted by the time it comes up and just cools into basalt or other volcanic rock.  Melted rock never cools back into what it looked like originally.