Here are some photos from the event.  The schedule is still listed below for anyone who is interested in knowing more details about what we did. 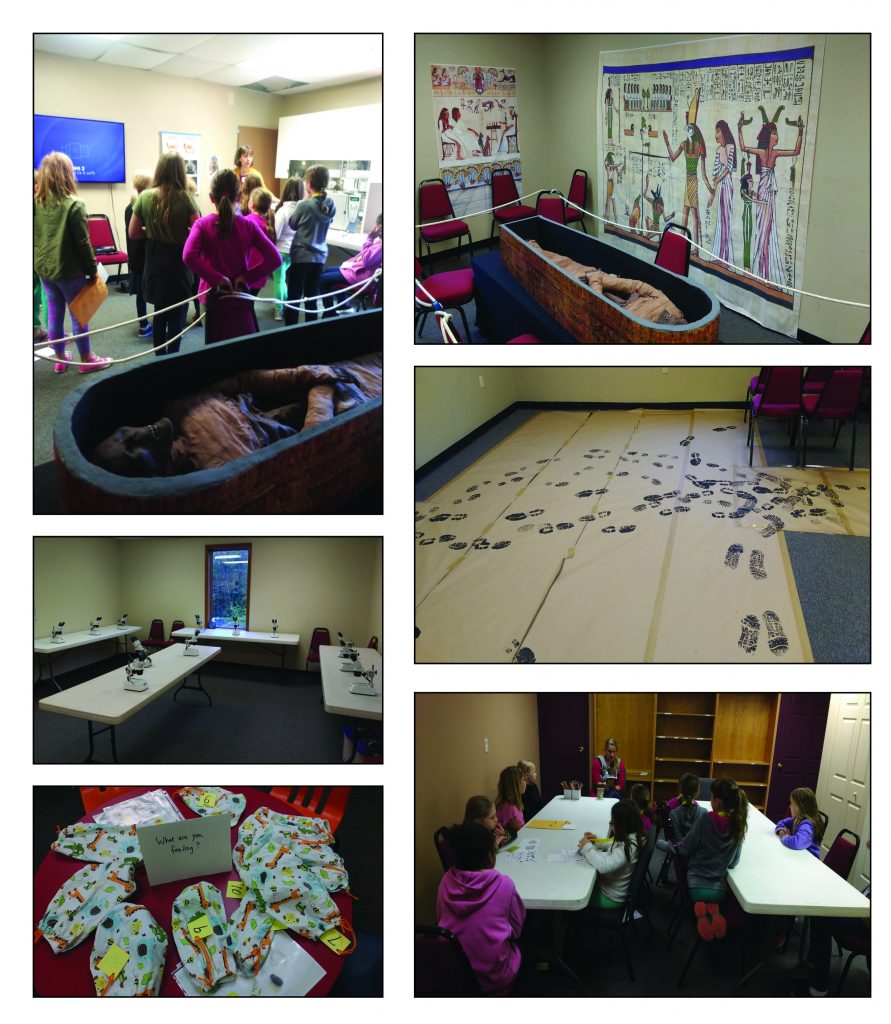 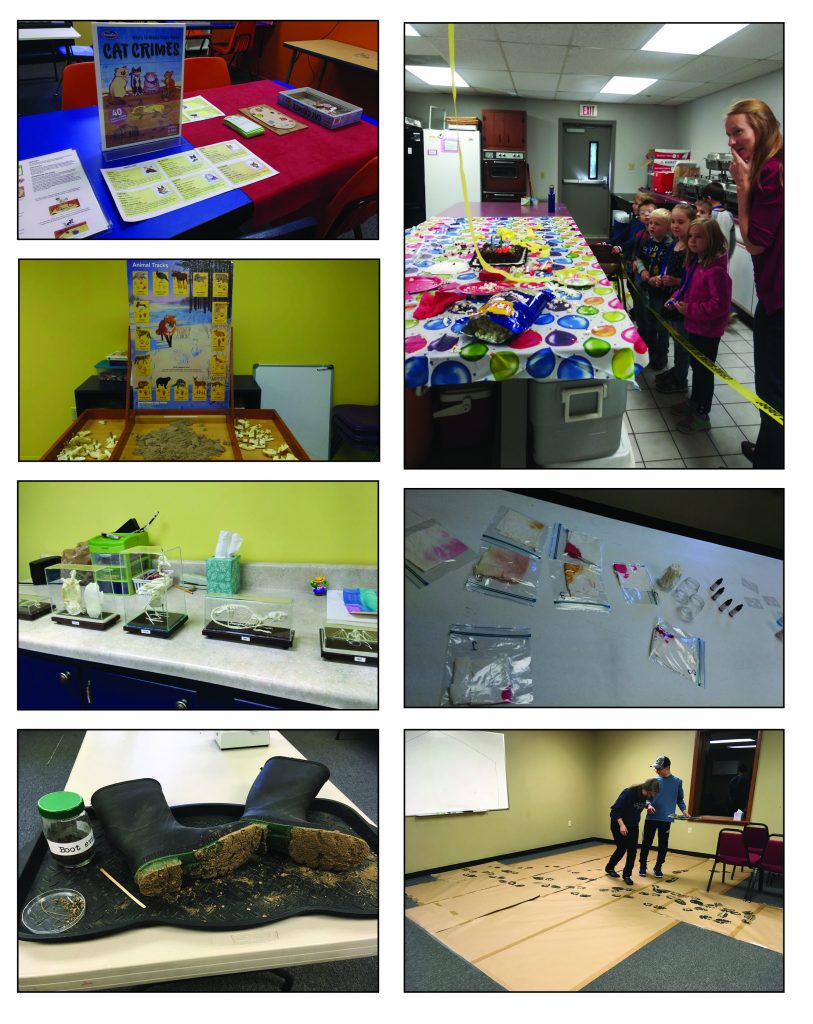 HS:  “Introduction to Forensic science,” “Introduction to Crime Scene Investigation,” (both of these with our special guest from the PSU forensic department), “Blood Lab,” “Art Forgery Forensics,” “DNA Analysis,” and “Forensic Archaeology.”

E3: “Fingerprints and Footprints,” “Microscopic Clues,” “Forensics with Soil and Sand,” “Forensic Archaeology with an Egyptian Mummy,” “Intro to CSI” (with our special guest, “Observation Games”

PS:  “Exploring Magnification,” “Read Aloud Mystery Stories (picture books),” “Fingerprint Art,” visit with a K-9 unit, “Track and Trails (animal prints),” “Feel and Guess sensory game,” “Scavenger Hunt,” plus a few more TBA and a chance to get on the Tumblebus right after lunch.  Afternoon details are TBA, according to how many in this age group will be staying until 3.

Our special guests for this event will be:

Introduction to Forensic Science for HS:  This will be a 30-45 minute discussion of what all forensic science encompasses and some of the interesting career possibilities it offers.  It’s not always crime scene investigation.  Forensics can include many branches of science including engineering, dentistry, data analysis, linguistics, toxicology, psychiatry, botany, biology, and more.

Introduction to Crime Scene Investigation (HS, MS, E3):  This topic will be introduced age appropriately for each group, and we won’t have anything gory or disturbing.  We’ll learn about all the factors that investigators must consider when they arrive at a scene.  We’ll also learn how evidence is collected so that it can’t be altered or destroyed or tampered with.  There will be a mock “crime scene” with various objects that can be collected or that might contain fingerprints or other clues.  Students will do some hands-on activities at the mock crime scene.

Art Forensics for HS:  How do art forgers get caught?  It’s often very hard to catch them without some super high tech equipment.  Rarely it’s as easy as identifying a false signature, but usually chemical analysis as to be done on paint, canvas fibers, and other materials used.  Various types of chromatography or spectrometry can be used to determine the molecular structures of paints and dyes.  In one case, carbon-14 was used to catch the forger.  Students will do a hands-on simulation of carbon-data showing how this technique can be used to prove that forgeries were painted too recently.

Blood Lab for HS:  What are some of the aspects of blood that forensics can use to identify, or at least rule out, suspects?  How is blood identified at a crime scene?  How can you tell the difference between animal blood and human blood?  We will use microscopes to look at some real blood samples.  Possibly have a simulation of blood typing (real typing is too expensive.)

Fingerprinting for HS:  This will go into fingerprint analysis and how they use computers to compare huge databases of prints.  However, we’ll also include some hands-on activities.

Forensic Archaeology:  This last hour will be a chance to head over to the mummy room and hear about a real-life mummy mystery that occurred in a museum in Bolton, England.

Forensics with Soil and Sand for MS, E3, E2:  Clues in dirt and sand can be vitally important.   We’ll do some hands-on labs using soil and sand samples that have been collected as clues for this lab.  You’ll learn some earth science in this session!

Fingerprints for MS, E3, E2:  Make a set of your own fingerprints and use magnifiers to identify features of your prints that make them unique.  Then practice lifting a fingerprint from an object, making it visible, and putting it on a card as evidence.

Footprints for MS, E3, E2:  Watch a short intro film about how experts collect footprint evidence.  Pretend you are a suspect and use a real forensic tool to make an official print of your shoe (a nice souvenir to take home).  Find out how to classify treds and look for identifying marks in the prints we made.  Finally, examine a “crime scene” made of footprints and try to figure out what happened there.

Blood Lab for MS:  Look at some samples under a microscope and find out what forensic scientists are looking for.   Also learn about blood types and how they can help rule out suspects.

5-Minute Mysteries:  A language arts listening activity.  Short “Who Dun It” stories to discuss as a group.

Egyptian Mummy Mystery for MS, E3, possible E2:  We’ll have a “real” mummy on the premises.  A facsimile, yes, but possibly scary to younger kids, so E1 is not scheduled for this topic and E2 are welcome to opt out.  We’ll learn about some of the forensic techniques that are used in forensic archaeology, such as linguistic analysis, dental forensics, analysis of bone x-rays, and most importantly, gas-chromatography and mass-spectrometry (which will be explained so they can understand).  As part of the explanation, they’ll do a small liquid chromatography experiment of their own.

Microscopic Clues for E3, E2, E1:  A selection of things to look at under magnification, such as natural and synthetic fibers, hair, blood cells, etc., with age appropriate choices for each group.  We’ll try to determine the identity some mystery fibers, also.

Observation Games for E3, E2, E1:  The PSU Forensic Summer Camp always opens with observation games.  This stresses how important observation is.  We’ll do some fun group games that involve being observant.

Mystery in the Kitchen for E2:  Identifying substances by chemistry (the classic white powers lab), plus another short lab if we have time.

Fingerprint art for E2, E1:  Use your fingerprints to create people, animals, and more.

K9 Visit for E2, E1, PS:  We are working on having a K9 unit (trained sniffing dog and owner) there, late morning.  Details TBA

Preschool:  This age group will not rotate around to the different rooms used for the older kids activities.  Preschool will have two rooms dedicated to activities for this age group.  We will also have some of the indoor gym equipment available.